Rihanna is dating longtime friend, rapper A$AP Rocky. The news comes after the New York Post‘s Page Six reported that the couple — both 32 — was spotted having dinner with friends over the weekend.

The couple has sparked romance rumors since Rihanna split from her boyfriend of three years, billionaire Hassan Jameel, in January. In July, Rihanna featured the apper in her Fenty Skin campaign. The duo did several interviews together to promote the collaboration.

A$AP Rocky and Rihanna’s friendship goes way back — te rapper served as an opening act for the U.S. dates of Rihanna’s Diamonds World Tour in 2013. A$AP Rocky was also featured on her track “Cockiness.” The duo was also seen attending a Louis Vuitton fashion show in Paris back in 2018. 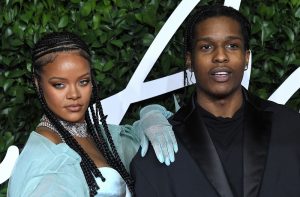